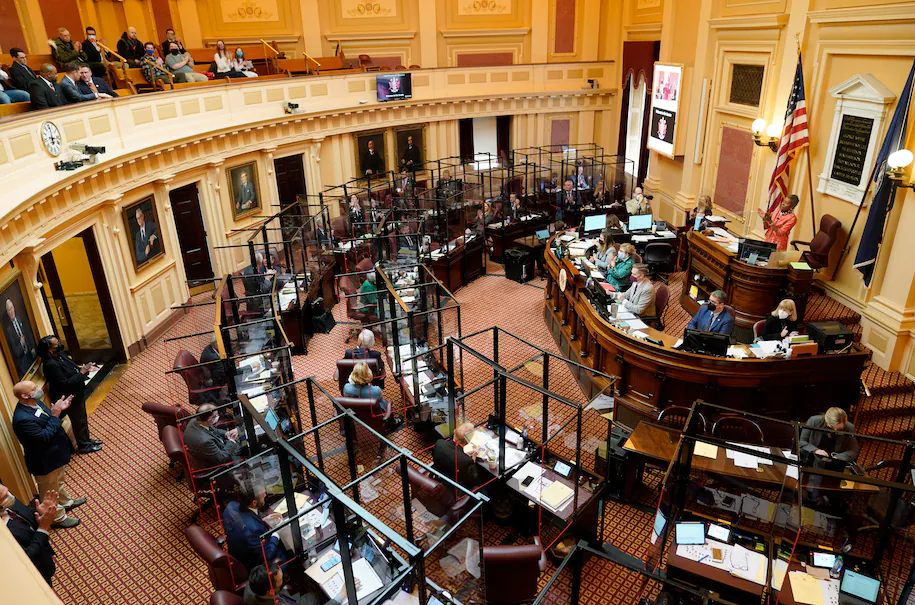 RICHMOND, VA, 12 January 2022 – Delegate Tara A. Durant (R-Stafford) and Senator Todd E. Pillion (R-Washington) tonight delivered the Republican perspective on the State of the Commonwealth.  The text of their remarks, which were broadcast following outgoing Governor Ralph S. Northam’s (D), are as follows:

“Good evening and thank you for joining us after the State of the Commonwealth address.

“And I’m Senator Todd Pillion from Washington County in the great Southwest.  Tonight, we’d like to take a few minutes to give you the Republican perspective on the state of our commonwealth.

“In delivering his final address to the General Assembly a few moments ago, Governor Northam detailed some of the events that have characterized the last four years.

“Just three days from now, at noon on Saturday, we will inaugurate a new governor.

“The decisive results of November’s elections, with Glenn Youngkin, Winsome Sears, and Jason Miyares prevailing, signaled that Virginians wanted to move in a different direction.  Returning Republicans to the majority in the House of Delegates only reinforced the people’s desire for positive change.

“During last year’s campaign and in the days since his election, Governor-Elect Youngkin has signaled a change not only in policy, but in perspective and tone, as well.  His emphasis will be on unity, bringing Virginians together by advancing initiatives that will lower your cost of living, create jobs by improving our business climate, and make our streets and neighborhoods safer.

“Governor Youngkin’s ‘Day One’ agenda is remarkable because it embraces something all too rare in government: common sense.

“Virginians know that if you weaken our sentencing laws, parole violent criminals, and denigrate the work of our police and sheriff’s deputies, Virginia will be less safe.

“They know that if our children aren’t in the classroom and parents are excluded from decisions about what our schools teach, the quality of education – and the prospects for our children’s future – will diminish.

“Making government work for all Virginians shouldn’t be a partisan issue.  Governor Youngkin has stressed the support he earned from Republicans, Independents, and Democrats.

“As Tara is about to detail, our House Republican colleagues have an ambitious agenda for this session.

“Earlier today, our House Republican Majority held a press conference where we introduced our common-sense, forward-looking agenda for the 2022 session.

“Our agenda for the coming session was set last year, as each of us went to thousands of our fellow Virginians and asked them what was on their minds. They told us, in no uncertain terms, that our Commonwealth was on the wrong track and we needed to change course.

“Republicans listened. This session we’re going to bring forward legislation that would ensure our standards only go higher, and that our schools get the resources they need to not only pay our teachers well, but rebuild schools that for far too long have been crumbling.

“Voters told us they want safer streets, and an end to the violence that takes so many young lives in our cities. They told us they wanted help dealing with inflation and skyrocketing energy prices.

“Republicans listened. We’re introducing legislation that will keep dangerous, violent killers behind bars and off the streets, and that will bring accountability and change to our badly broken Parole Board. And we’re devoting millions of dollars to proven anti-violence strategies like Project Ceasefire – which reduces gun violence without resorting to gun control.

“We plan to cut taxes by ending the grocery tax, and refunding part of Virginia’s surplus to those who paid it – the taxpayers. And we’re going to double the standard deduction, putting more money back in paychecks, while ending mandates that drive up energy prices.

“Virginians spoke, and Republicans listened. Together, Republicans in the House and Senate of Virginia will continue to work to make our Commonwealth a better place for all Virginians.

“Senator Pillion and I thank you for watching tonight.  On behalf of the Senate and House Republican Caucuses, we wish you and your family a happy – and healthy – new year.”

Delegate Tara A. Durant represents the 28th District in the House of Delegates.  As currently constituted, the 28th House District includes portions of the City of Fredericksburg and Stafford County.

Senator Todd E. Pillion represents the 40th District in the Senate of Virginia.  As currently constituted, the 40th Senatorial District includes the City of Bristol, and Grayson, Lee, Scott, and Washington Counties, and portions of  Smyth, Wise, and Wythe Counties.