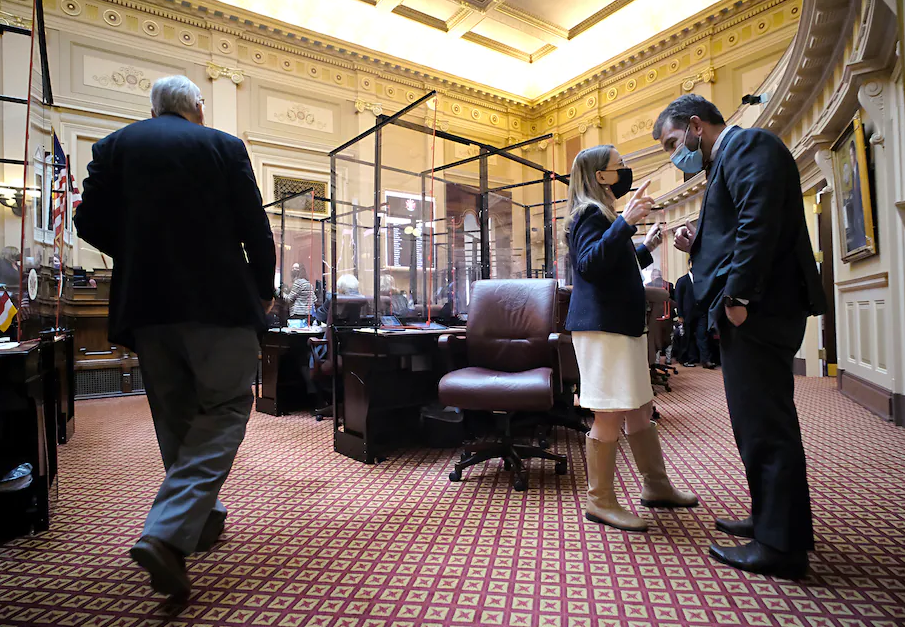 RICHMOND — Virginia’s Senate voted Wednesday to make masks optional in all of the state’s K-12 schools, with three Democrats joining Republicans to support a goal that Gov. Glenn Youngkin has tried to accomplish with a legally disputed executive order. The measure now heads to the Republican-led House, which is expected to support it.

The Senate voted 21 to 17 for a bill that would require schools to instruct students in person and give parents the right to decide if their children wear masks in school. It would take effect July 1, but Youngkin (R) hopes to get the measure implemented sooner, perhaps as soon as the end of February.

The Senate Democrats who voted for the bill said they agreed with the governor’s mask-optional goal, but doubted the legality of his executive order. Youngkin celebrated the vote as a win in a written statement that also took a harshly worded swipe at school boards that continue to require masks.

“I promised that as governor, Virginia would move forward with an agenda that empowers parents on the upbringing, education, and care of their own children. I am proud to continue to deliver on that promise,” he said. “This vote also shows that school boards who are attacking their own students are stunningly detached from reality.”

Sen. Siobhan S. Dunnavant (R-Henrico) and Sen. Chap Petersen (D-Fairfax City) teamed up to create the mask measure, which emerged from the Senate as Democratic governors in several other states have recently moved to end statewide school mask mandates. But those governors were still leaving masking decisions up to local school boards. The Virginia bill would let individual parents decide.

During a debate that ran for more than an hour, Dunnavant, a practicing physician, took issue with the notion that someone who opts against wearing a mask threatens the health of others.

“It’s not accurate scientifically. It’s un-American,” she said. “I decide for myself. I look at the risk.”

She acknowledged that senators faced a conflict between two provisions of the state constitution — one that says school boards are in charge of their schools, and another that asserts parents have “a fundamental right to make decisions concerning the upbringing, education, and care” of their children.

Democrats have narrow control of the Senate and three of them joined Republicans to support the bill — a drop-off in support from a day earlier, when 10 Democrats had signaled their support in a preliminary vote. The three Democratic senators who voted for it were Peterson, Joseph D. Morrissey (Richmond) and Lynwood W. Lewis Jr. (Accomack).

Youngkin won office in November with a campaign that championed parental rights and played into a range of school-related culture wars, ranging from sexually explicit classroom materials and teaching about systemic racism to coronavirus mask and vaccine mandates. He issued a flurry of executive orders on Inauguration Day last month, including the one aimed at giving parents the right to decide if their children wear masks in schools.